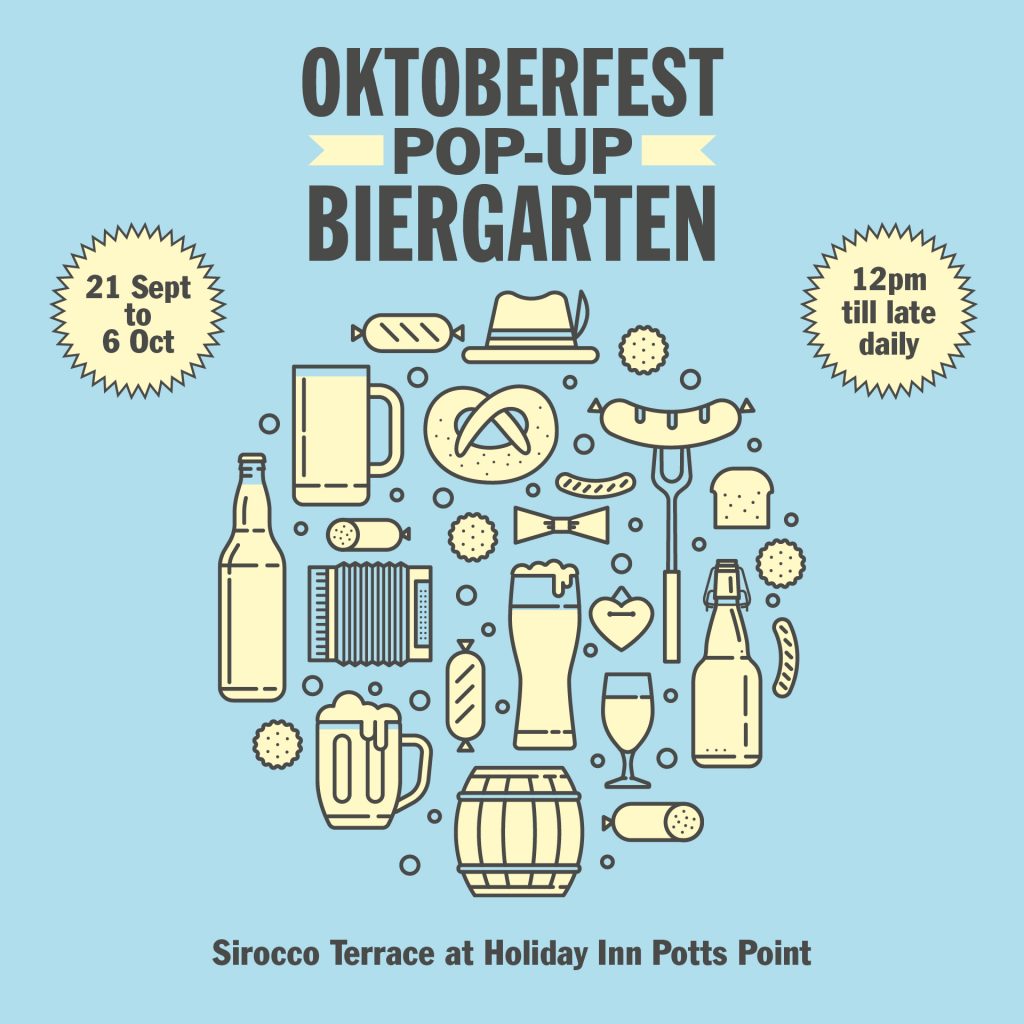 The traditional Bavarian Volksfest, Oktoberfest, is one of a kind! As the world’s largest beer festival and travelling funfair, over six million people from around the world attend. The annual event is held in Munich, Bavaria and Germany every year.

Oktoberfest, or the Wiesn as it is locally known as is a 16 to an 18-day festival. It runs from mid or late September to the first Sunday in October. The event, which has been held since 1810, holds a special place in the Bavarian culture.

The Oktoberfest celebration, however, has made its way to several cities around the world. Each city has been able to model the festival according to the one celebrated in Munich.

Raise your stein to the world’s best beer festival! We are celebrating our love of everything Bavarian with an Oktoberfest Pop-Up Biergarten featuring beer and German food specials. If you can’t make it all the way to Munich this Oktoberfest why not revel in spring in Sydney.  Some of the most popular German flavours will be on hand at Sirocco Terrace. O’zapft is! 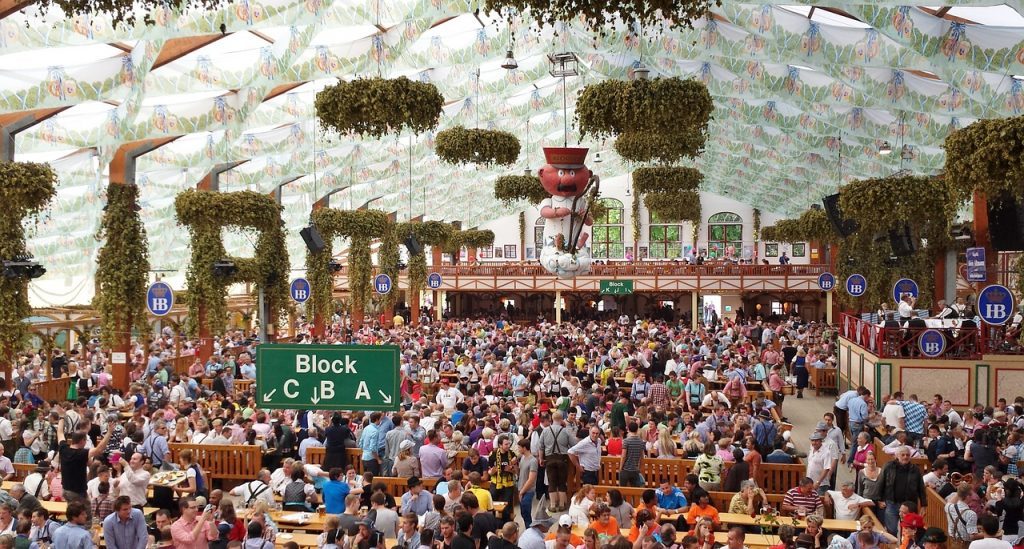 What happens at Oktoberfest?

Oktoberfest is notorious for their German influences such as food, live music, lederhosen, and more importantly, the Oktoberfest beers. Large quantities of beer are consumed every year at the event. For instance, almost 7.7 million litres of beer was served at the 2013 installment of the event alone.

Attendees also get to enjoy numerous attractions, which include a wide assortment of side stalls. There are even games and even amusement rides on hand. A wide variety of traditional food stalls are also available at the event. 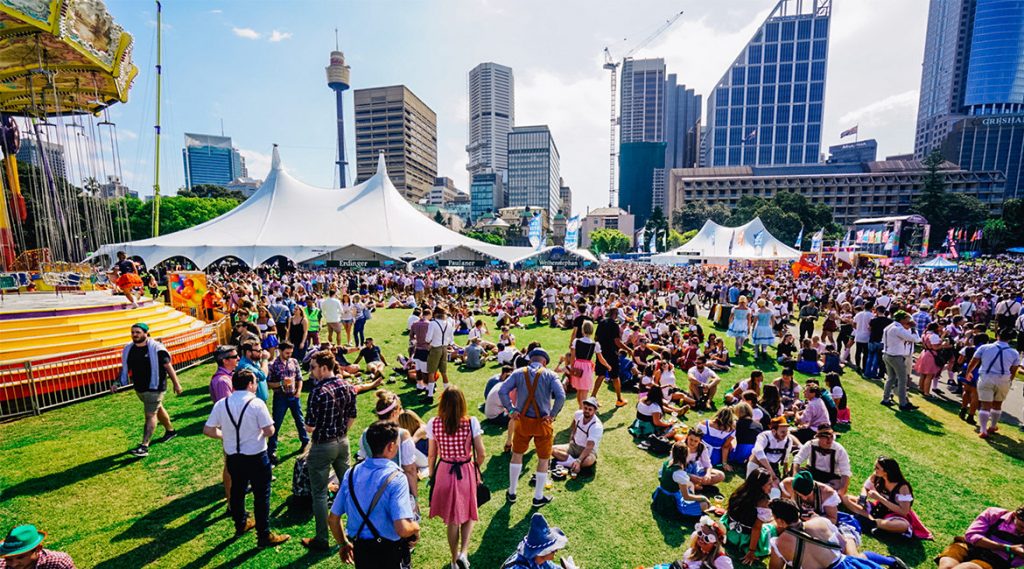 Aussies love their fair share of great beer and festivals so it’s no surprise that they have adopted the world’s biggest beer festival. Oktoberfest in Australia has been celebrated for over half a century now.

For instance, the Harmonie German Club in Canberra has been organizing three-day celebrations every year in October for over 45 years. The event has since moved across the border to Queanbeyan in New South Wales.

Following the ban, a private event company called Nokturnl Events launched “Oktoberfest in the Gardens” in the Supreme Court Gardens. The event was held in Perth on 7 October 2011. The event has since expanded to other cities including Adelaide, Melbourne and Sydney. Today, the celebrations attract more than 50,000 visitors annually making it the largest Oktoberfest celebration in Australia.

Sydneysiders looking forward to celebrating Oktoberfest needn’t look any further as you can expect to find more than a few good options for Oktoberfest in Sydney itself. You can find an Oktoberfest celebration taking place nearby regardless of what part of the city you’re in.

Inspired by their love for traditional Bavarian celebrations and beer, the love of Oktoberfest has made its way to the inner cities of Sydney with popular events such as Oktoberfest in the Gardens taking place every year. The festival features several attractions from a variety of food stalls and games to an array of the finest European beer and music, all in one place. So, it’s no wonder that a crowd of people come from all over the world to join in on the celebration.

However, though Oktoberfest in the Gardens is a major attraction of the event, you can still find party bars and beer halls in Sydney to celebrate the Oktoberfest season.

Dust off your lederhosen and get your beers ready we draw closer to the return of the world’s biggest beer festival, Oktoberfest! For those looking for a more local experience, Holiday Inn Potts Point will also be celebrating the love of everything Bavarian.  There will be a special Oktoberfest Pop-Up Biergarten at Sirocco Restaurant & Bar, featuring beer and German food specials. If you can’t make it all the way to Munich this Oktoberfest why not revel in spring in Sydney with some German flavour at Sirocco Terrace. O’zapft is!