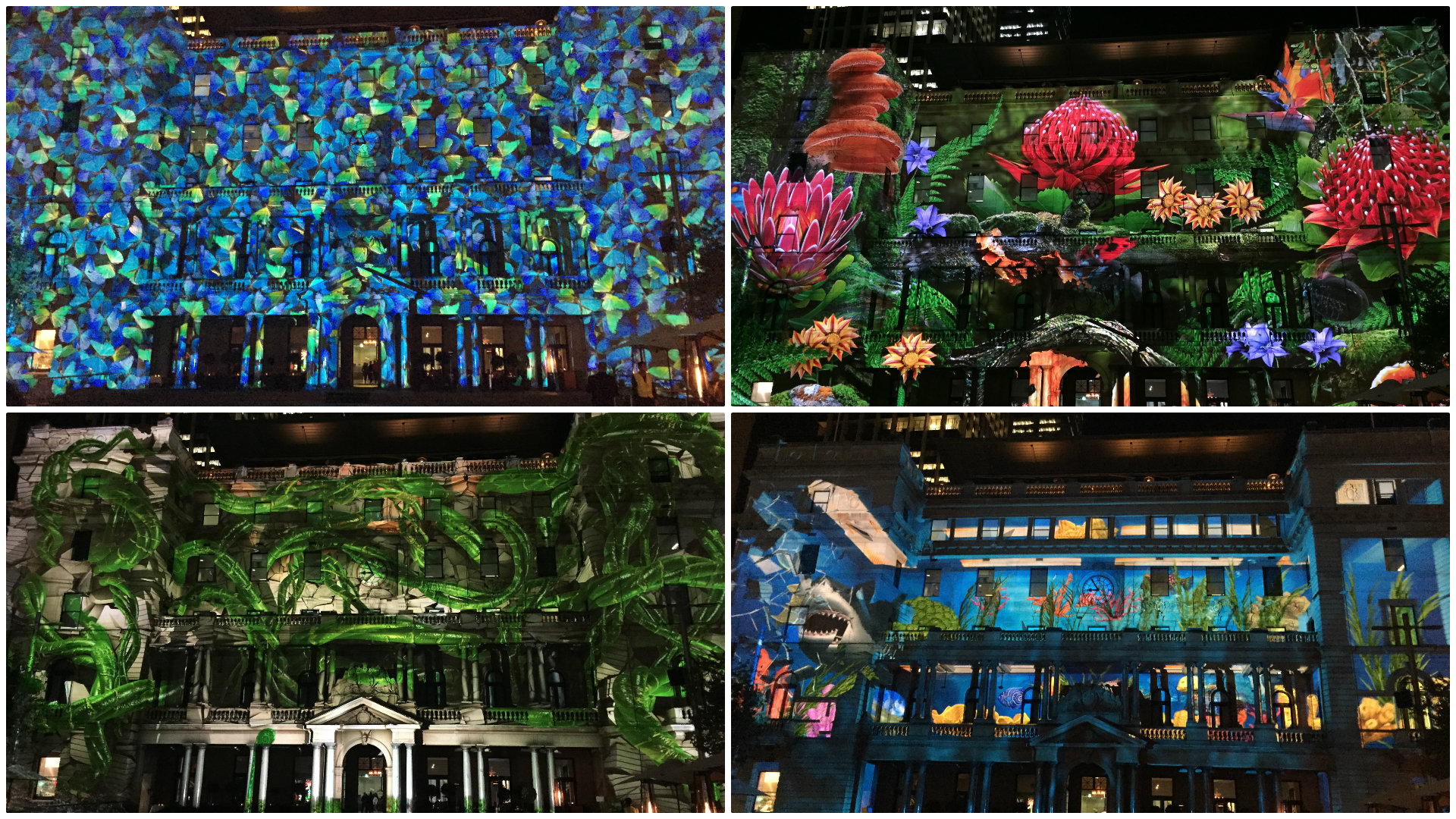 With Vivid Sydney 2015 now officially in full swing we decided to head out and about to explore the festival of music, light and sound. We can tell you that this year’s program does not disappoint. From ghostly dresses in The Rocks hidden laneways , to bright lights engulfing the entirety of Circular Quay, we saw it all. Here’s the low-down on what you simply must see this year. 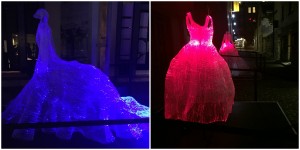 It was eerily quiet when we wandered down the cobblestone Kendall Lane to view the ghostly apparitions, The Dresses. Tae Gon Kim does an amazing job creating the illusion that the dresses are simply suspended in the darkness. Avid history lovers will know about the dark side of The Rocks and this installation adds an element that will send slight shivers down your spine. 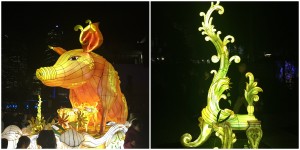 Entitle takes Chinese lantern making to a whole new level with large decorative displays located in Barney and Bligh Reserve. Though very pretty to look at, this artwork makes a powerful statement about the consequences of an overindulgent lifestyle. 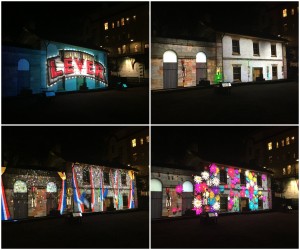 Weaving our way through the crowds to reach the front of the barricades, we were instantly mesmerised by this interactive display at the historic Cadmans Cottage. Spectators are invited to become ‘creators’, as they take a place in front of the cottage and see their movements projected in real time onto its walls. There was a queue for this one but it is worth the wait. 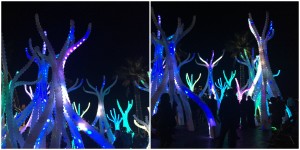 This particular display sits against the backdrop of the Sydney Harbour Bridge. The design is inspired by the native mangroves of Australia’s waterways. You’re able to get up close and personal with this display and weave your way in and out of the structures.

The facade of the Museum of Contemporary Art is transformed into a wonderful continuous display of light and sound machines. 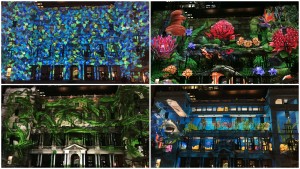 This display definately lives up to its name. We sat literally enchanted by what was in front of us on the facade of Custom’s House for over half an hour, and the whole thing was only about 10 minutes long. It is a must-see at Vivid and one of our top highlights for this year’s program. The projected images deptic the ever evolving flora and fauna of Sydney in such an enchanting way that you’ll want to watch it over and over and over and over again. 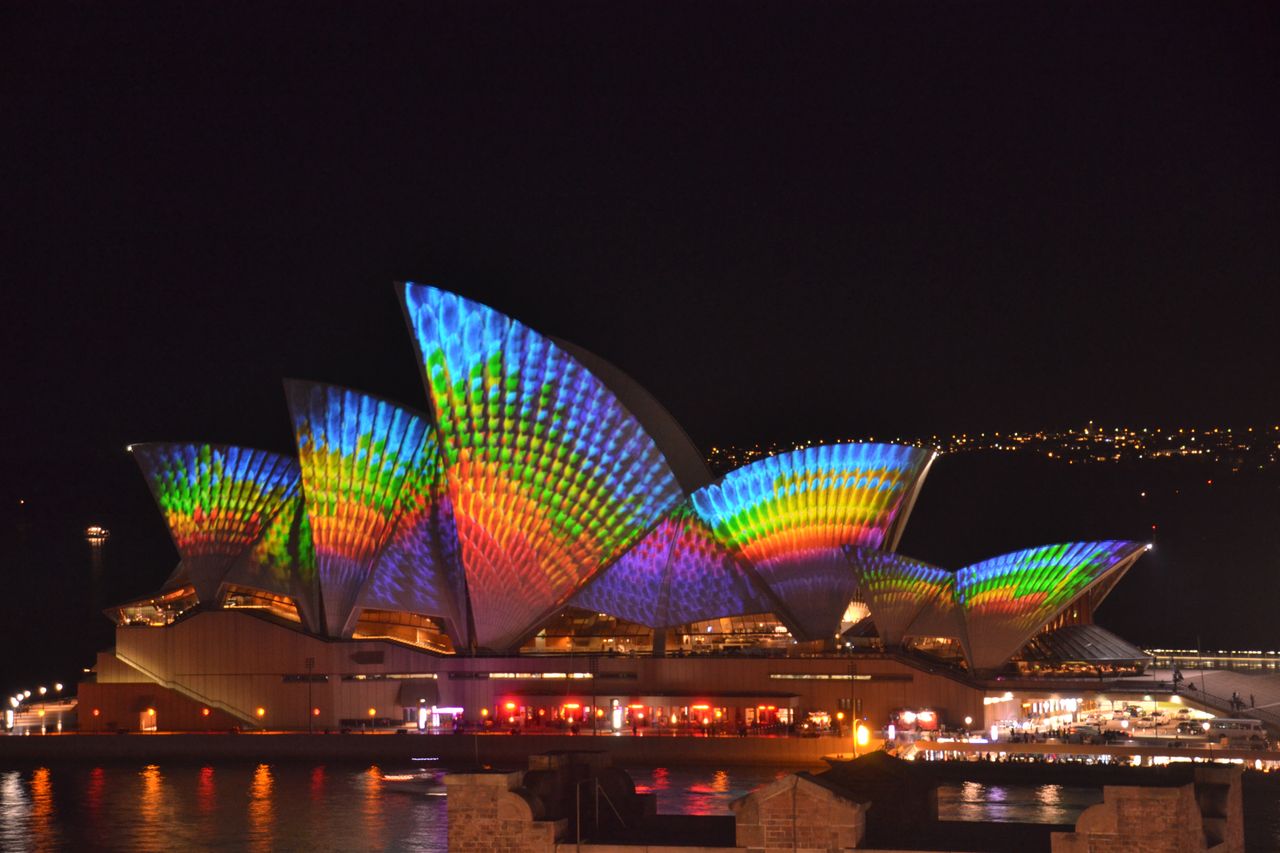 Vivid Sydney returns for its 7th year on the 22nd of May 2015, and our team couldn’t be more excited for a festival line up that includes lights, live talks, interactive displays, and much more.

Recognised as one of the largest events of its kind in the world, Vivid is an annual festival of lights, music and ideas. Along with its traditional locations in The Rocks, Circular Quay, Darling Harbour and Macquarie Street, this years’ festival will be expanding to include Chatswood, Chippendale, The University of Sydney and Pyrmont. It’s kind of a big deal, and a great excuse for Sydneysiders to venture out on a wintery evening.

This year’s program is jam-packed and kicks off on May 22 until June 8, 2015. This gives you approximately two and a half weeks to get out and watch Sydney transform into a spectacular display of light and sound. 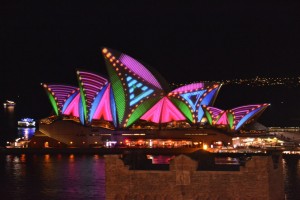 With so many events taking place in the 2015 Vivid Sydney program, we know it can be difficult to choose which sights to see, talks to attend and music to enjoy. That’s why our team have put together the list below of unmissable events to help you get the most out of this year’s program. 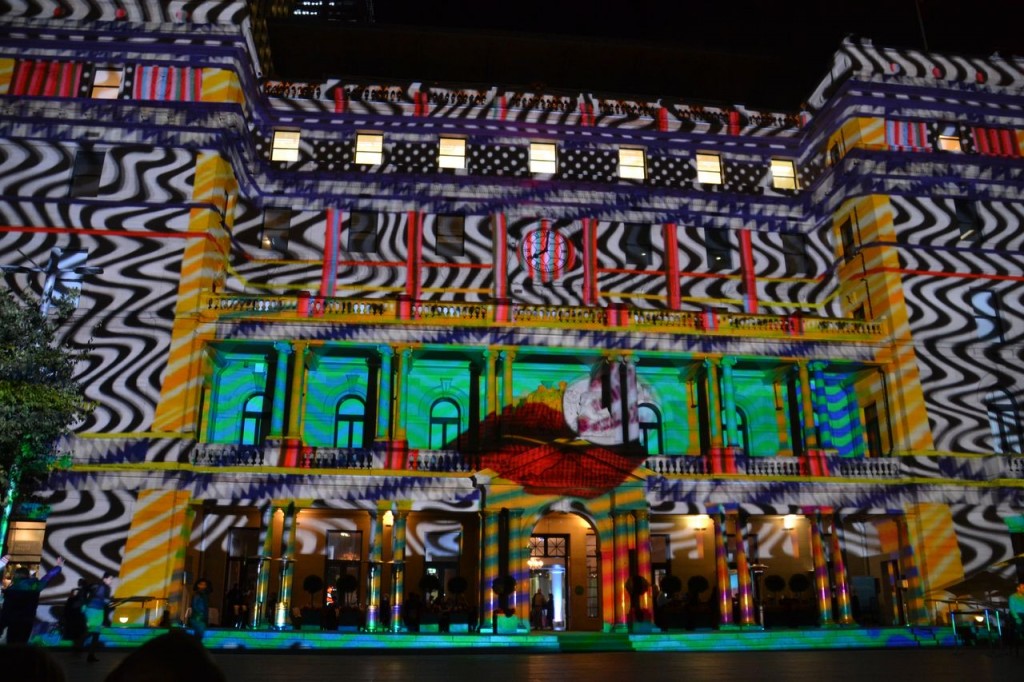 Begin your journey on the spectacular Vivid Light Walk at the forecourt of the Sydney Opera House, where you’ll find giant Siamese fighting fish in Splendens. Continue past the bright, red, pulsating, Heart of the City in East Circular Quay and into the AMP Forecourt for Light Origami and then onto the Museum of Sydney’s Floating Glass Cube. If you’ve always wanted to try your hand at DJ-ing, your opportunity lies in The Rocks and First Fleet Park with BeatDice.

A bit further along you’ll come across a giant Rococo pig called Entitle, one of the statement pieces of this year’s festival. You’ll then take on the biggest multi-player experience in Cadmans Cottage with INTER/play and then wander into the cobblestone Kendall laneway where the ghostly apparition, The Dresses, is displayed.

A large, ornate Geometric Eye watches over the city as you head back towards the harbour, and nearby is a large loveable crochet Dolly made from LED light and cotton ropes. Finish your journey at Dawes Point at You Are Here and catch the Tree of Light. There are plenty of selfie and picture opportunities along the way, so make sure to pack your camera.

Paint a masterpiece on Sydney’s iconic skyline with nothing but a touch screen and your imagination. This unique experience allows you to express your creativity by illuminating the structures surrounding Circular Quay. 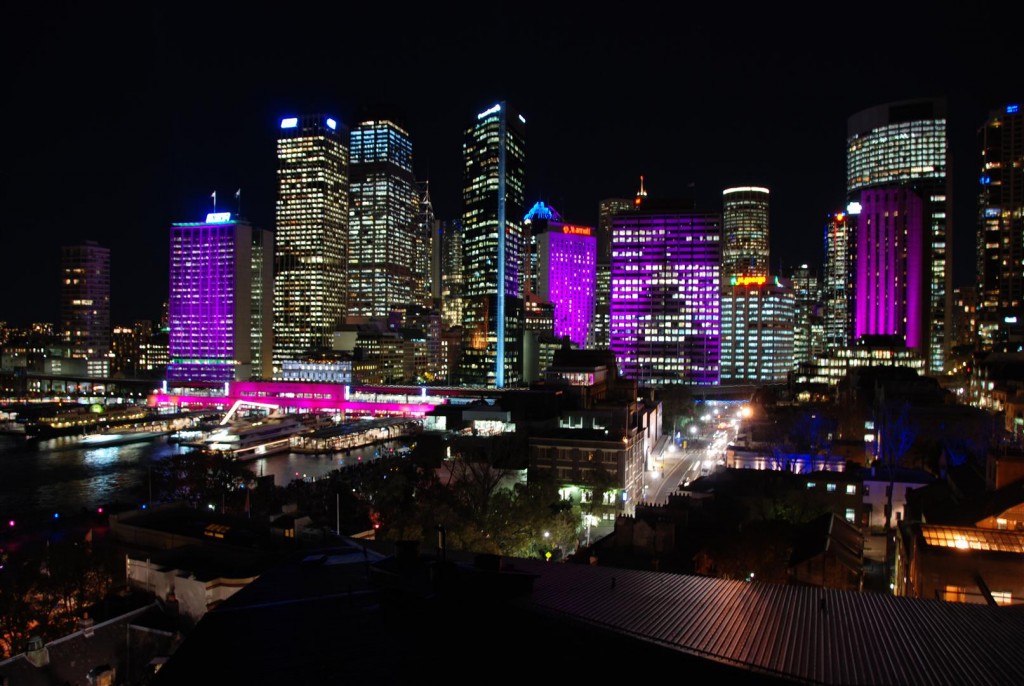 1) An Evening with Morrissey

Don’t miss the chance to catch one of the most iconic figures in pop music, legendary crooner, Morrissey. He’ll take the stage in the Concert Hall over four massive nights from 26 May – 31 May. Tickets will sell out fast, so be sure to book yours now.

Are you a fan? Returning to the Opera House for a concert of epic proportions, the Silverchair and Dissociative frontman will premiere his long-awaited solo album with two exclusive concerts during Vivid Live. Click here to book your tickets now.

A familiar face at Vivid Live, Sufjan Stevens will make his solo return at the Opera House, performing his seventh album ‘Carrie and Lowell’. Click here for tickets. 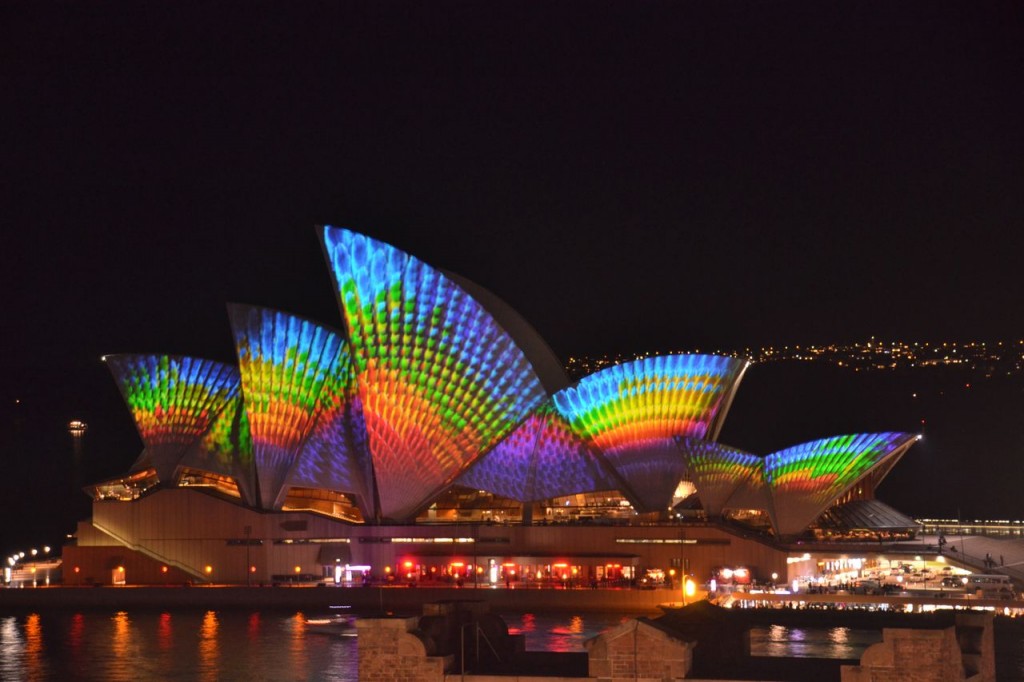 Fans of ‘Mad Men’ and ‘The Sopranos’ are no doubt awaiting this event with baited breath as show-runner Matthew Weiner makes a stop in Sydney for one exclusive Q&A session. Will ‘Mad Men’ conclude with Don working for Peggy? Did Tony Soprano survive the series finale? These are just some of the questions punters may be keen to ask the multi-award Emmy winning writer. Early Bird tickets are now on sale.

The work of legendary designer Stefan Sagmeister will be familiar to fans of the Rolling Stones, HBO and Brian Eno, but did you that the renowned poster artist is also an accomplished writer? Sagmeister will be discussing his design career and his book, Things I Have Learned In My Life So Far, as part of the Vivid Ideas Game Changers talks series. Get your tickets here.

For more great events, exhibitions and ideas, check out Vivid Sydney’s website. We recommend you head out and check out all the light, sound and colour for yourself.

You’ll need a few nights to truly experience the spectacle of Vivid Sydney, so we’re offering a great package including accommodation and breakfast. Click here to book. You’ll be a short 15-minute walk to the Sydney CBD, while the train station across the road will get you to the city in one stop. Why not book a Harbour View Room or Suite and enjoy a stunning outlook of Vivid at Circular Quay from the comfort of your room?

Don’t miss out on this unique event that only takes place once a year. 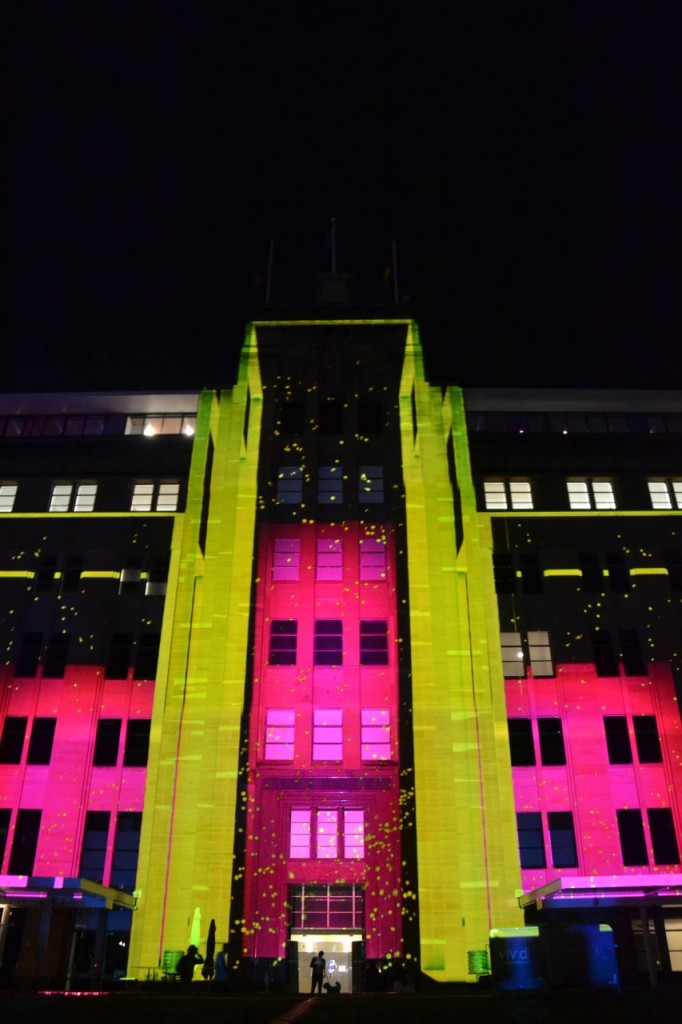